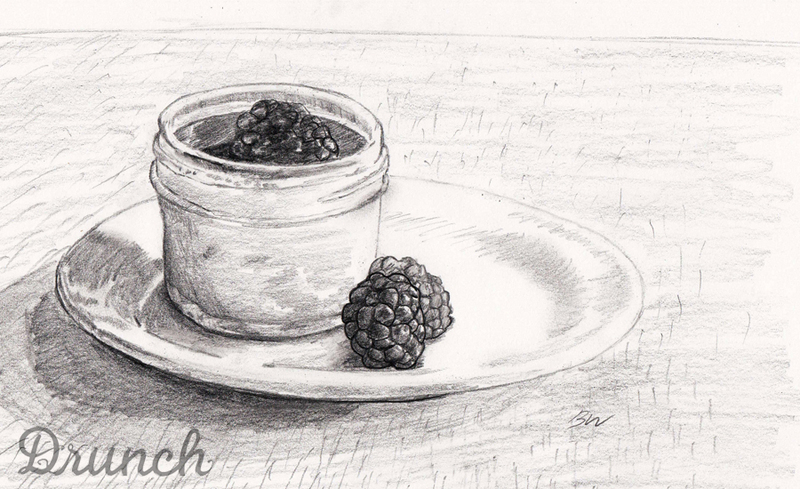 Where is my Danny Boy? thought Mother Gem, scrubbing at a long-handled spoon. She spread the window wide and sung to the morning air, “Danny Boy!” Only the sweetness of bird music caressed her dainty ears.

Out in the bushy yard, Mother Gem found no signs of that dirty little Danny Boy. She groped around the dark shed, peered under the wheelbarrow and even bounced on her tiptoes to look out over the blooming wall of azaleas; neither Danny Boy’s hat nor his glasses nor his round little rump appeared in the whole wide yard. Mother Gem clucked her tongue and squeezed back inside.

At the big red front door, she tucked in her frumpy blouse and slipped on her good walking shoes. With a cluck of her tongue and a twinkle in her eye, Mother Gem stiffened and, with a tug of the handle, set out in search of her naughty little Danny Boy.

Putt putt went the Mailman’s truck as it slid up beside Mother Gem. He waved at her with his thick, strong hands.

“Heyo Mother Gem,” said the Mailman. He loosed his girth from the mail truck. “You looking for your little Danny Boy?”

“Oh he just might have!” said Mother Gem. “Let’s have a peek.” And so Mother Gem and the Mailman disappeared into the truck to look.

Mother Gem smiled and waved bye-bye to the big old Mailman. Danny Boy hadn’t been in the truck. Where else could my naughty boy be, Mother Gem thought to herself. I bet I’ll find him at the candy shop, like as not.

The town around Mother Gem spread out languidly as she strolled all the way down Broad Street. The folds of Mother Gem’s skirt flapped past the towering church, and her tight, gray bun bounced past the lazy Library and finally her petite feet caressed the floor of the Sweets Shop.

“Why Mother Gem,” said the Sweets Shop Man, lifting his pork pie cap. “I bet I know who you’re looking for.”

Mother Gem smiled innocently at the Sweets Shop Man and put her mouth around a lemon sucker.

“You’re looking for that little rascal Danny Boy!” The Sweets Shop Man rubbed his cheek with a sticky finger. “You know what,” he said. “I think your little Danny Boy may have snuck in my back door. Wanna look!”

It was a gentle day outside, birds performed, clutching long, swaying branches. The clouds hung fat as cream in the sapphire sky. At last Mother Gem popped from the Sweets Shop with no little Danny Boy by her side. This dang breeze, she thought, patting loose hairs back into her gray-streaked bun. Oh where is my Danny Boy!

Bustling along as sweet as nectar, Mother Gem went straight to the Butcher. When Danny Boy was nowhere to be found, she made calls to the Painter then the Locksmith and even the Mayor of Town — Mr. Poppinjay himself — all of them helped her look, but Danny Boy remained lost! By the time she gave up her search, the moon was pale in the heavens and the birds had all shoved their heads tight beneath their wings.

I may never find my Danny Boy, Mother Gem thought to herself, coming into view of her snug little house. But wouldn’t you know, the house wasn’t dark like she’d left it, a light had sprung up in the window. Behind the curtain Mother Gem spied something: a fat, naughty, bouncing silhouette. Oh, that little rascal! thought Mother Gem as she rammed herself through the front door.

“Momma Gem!” said Danny boy, popping hot and sweaty into the hallway. Mother Gem pinched his dimpled cheek and led him back to his room.

“I’ve been looking for you all day!” said Mother Gem, playfully thrusting Danny Boy onto his sheet-strewn bed. “I went all over town looking for you, naughty little boy!”

“Why Momma Gem,” said Danny Boy, innocent as pie, “I was right here the whole time!”

“Right here!” said Mother Gem, putting her hands on her ample hips. “Why I don’t believe such talk. You were outside being a dirty little boy, playing in mud holes and squeezing slippery sticks.”

“But Momma Gem,” said Danny Boy. “I don’t like mud holes or slippery sticks! I like playing by myself.” He pointed at a little trampoline in the corner, sagging with use.

“I swear I will Momma Gem!” he said, earnestly gripping his pudgy little head. “I swear.”

“Thank you sweet boy,” said Mother Gem, enfolding Danny Boy in her warm embrace. And with a last peck, she left.

From across the house Mother Gem cooed out night night Danny Boy, and she heard her tired little scamp turn off his lights. He’s a good boy, she thought.

The next morning was bright and gay. Now, where has that Danny Boy gone? Mother Gem thought, her gaze caressing the whole bushy yard. Danny Boy was nowhere in sight. I’ll bet he’s up to mischief, she thought. So, Mother Gem put on her nicest outfit and came out for all the world to see. She just had to find her Danny Boy.