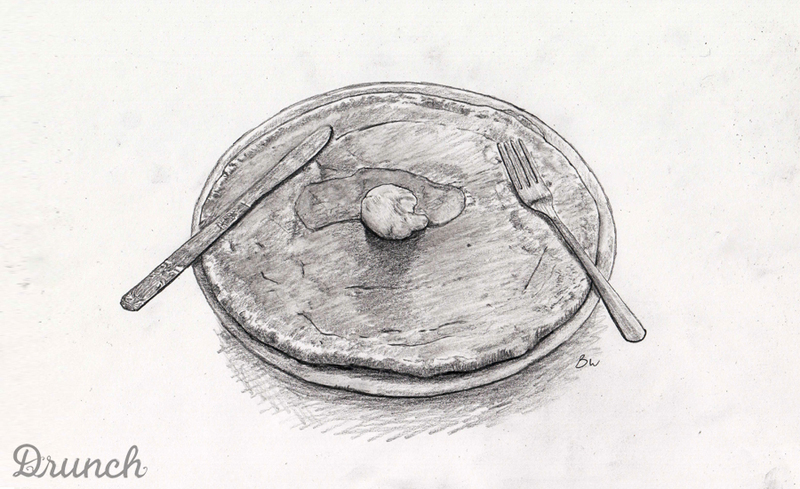 One summer’s morn we Good Gentlemen endeavored to erect a den in which to consume copious illegal drugs. It was Tim Tam’s plan — he being the one who procured for us our intoxicants. In compensation for Tim Tam’s underwriting of our risk, the rest of us provided payment for both our future drug den’s raw materials and the various uppers, downers, hallucinogens and barbiturates to be enjoyed therein.

Out in Buff Brick’s mole-pocked backyard — not that he was the only one in this house, simply it was his name on the lease — we began the build with weed-fueled confidence. F or reasons unknown, Tim Tam had written down the broader strokes of our wooden drug shrine’s plan on his forearm. Though the dimension’s Tim Tam had written out seemed dubious, we attempted to follow them nonetheless, sawing and angling the boards just so. Soon, thanks to the dissipating cloud cover, Tim Tam’s directions became illegibly slick with sweat. We had smoked enough joints by that point to conclude that this was no setback at all: our human ingenuity would fill in the gaps.

Indeed how hard could erecting a “Children’s Tree House W/ Secret Hatch” be? We were grown men, lords of construction, high on the air in our lungs and the fresh cocaine in our noses. In our mighty hands we gripped the very tools of creation, hammers and screwdrivers we wielded with a creative fervor that put shame even to the prolific architects of Rome. With abandon we unleashed our unfettered creativity upon that pile of lumber! We bayed furious hoots of victory with the stroke of every hammer and the turn of every screw. On that verdant morn we went at it simultaneously, each man his own foreman, attaching this to that and that to this. The smell of the pines mingled with wood dust, nails and the acrid powder at the back of our throats. From us sprang the will of man immemorial.

Only with Lasko’s shrieking whistle did we stand back to admire our craftsmanship.  In that first creative salvo we had manhandled the sundry boards and connecting pieces into a gnarled thicket, no use for the structure could be discerned; nonetheless, we were proud. We Good Gentlemen knelt shirtless in the presence of our wooden obelisk, the five of us: me, Tim Tam, Lasko, Buff Brick, and Nard. We clapped each other’s sweat-riddled backs and rubbed molly on our gums with vigor.

As the New England sun reached its apogee, we retreated to the shade of Buff Brick’s veranda to discerningly pick from a buffet of pills, chromatically arranged by Tim Tam’s neurotic wife, Eleanor. The neighborhood was quiet but for the EDM blasting from the tinny computer speakers we’d wedged into the sliding patio door. Gazing at my fellow comrades lounging upon and under a mismatched set of patio furniture, I knew that today would be different. Not like all the other days in which our drug-conjured heaven felt barely reached before it vanished again. I knew — with a certitude I will not to prescribe to the grand armada of chemicals already broadsiding my cortex — that this day would be new. Today, we would not come down off our high and spend the foreseeable future huddled like lizards beneath the soiled futon’s cushions. No. We would stuff our bodies with potions of unknown origin and potent effect. We would imbibe and quaff and snort and pop our way into exaltation. We would flood ourselves with the building blocks of revelation until our bodies burst asunder into pure light and found, in this dissipation, the sweet release of the infinite for which all mortals yearn.

With a squeal, Tim Tam hurled himself into Buff Brick’s above-ground pool. Soon, we all joined, floating in our various states as sparkling clouds passed stoically on the breeze. My mind wandered through its own catacombs, browsing for thoughts of significance. I cannot say exactly when, or how long my revelation took in coming, though the sun, I will say, seemed to be scudding across the sky. Staring up into the scattered radiation of the heavens, my mouth opened as my perfect idea took form. You see, there comes a moment in each man’s brief stint upright, that his one idea — his mental birthright — takes form. This idea will be perfect in its simplicity and need only be spoken to unleash its magic. Floating, a noodle clutched between my thighs, such a sibylline thought struck me.

With warrior’s cries we slopped soaking over the sides and flanked our monstrosity. Cleaving to its form like ants upon fallen bread, we yanked and pulled at it with no organization. This first attempt at hefting its mighty girth saw more than one man’s blood spilled, as many of the nails and screws were either bent, half-embedded or lancing out some or other side of its planks. Our masterpiece would not budge. The mélange of drugs storming through our collective nervous system allowed no failure in the face of such simple hardship. Nard, a rangy boy, volunteered to crawl beneath the structure and lift from below, a suggestion that  was immediately overruled by Buff Brick who deemed himself the only man for such a job. Standing, one foot planted upon the obelisk in a pose of premature victory, Buff Brick delineated his plan: once we five sufficiently hoisted the obelisk, mighty, shirtless he would scamper beneath and bear the brunt of the load upon his capacious back. None of us could gainsay this ambit, nor speak out against the various flaws in its design; Buff Brick, once loaded with amphetamines, brooked no debate healthy or otherwise.

After dutifully distributing and consuming the tabs of acid, the five of us daintily positioned our bleeding hands in corners and angles un-prickly. Upon Lasko’s count of “Yessah!” mightily did we heave our cumbrous creation from the earth, blowing spit-flecked air like dust-bowl oxen hard beneath the yoke. With our wooden porcupine not three feet off the ground, Buff Brick dove beneath and began to lift with his back and piston legs, laughing in his addled state at the pain of a thousand pricks. Five lumbering, labored steps — more than the mightiest slaves of Babylon — did we complete before I lost my footing on the wet grass and our construction came crashing down upon Buff Brick. Pinned beneath this gravity-driven iron maiden, he screamed for succor. Scrambling, Nard, Lasko and I — Tim Tam wandered back into the pool — tried to free Buff Brick. Our first heave saw the construction rise a single inch before crashing down again onto our comrade’s back. Only his lamentations could be heard above the EDM still pumping from the patio. We stopped a moment to re-orient ourselves, even going so far as to contemplate enlisting Eleanor — off busy counting the number of buttons on the air conditioner’s remote control. We decided against bothering the fairer sex.

The second rescue lift raised the beast an iota more than the last and Buff Brick managed to turn over before our hands slipped and let the tormentor back down upon him. Buff Brick, pinned and bloodied but now facing skyward, bellowed for us damned jackals to give him the ultimate strength left in our protein-starved muscles.

We reset ourselves and hoisted in unison. From Mother Gaia herself did I pull my vigor. Tim Tam, Lasko, and I trembled, drugged blood slamming through our veins, as we laboriously delivered our creation to the heavens. From beneath, in a position he knew better than thrusting betwixt the thighs of a female, Buff Brick blasted a mighty bench press into the stinging nettles of nail, splinter and screw. In its straining ecstasy my consciousness flew above my very body and I saw us there, a living representation of humanity’s struggle, stopped in time. For are we all not striving to release our fellow man from burdens of our own creation? Are we not simply joined in the collective endeavor to raise up our works and free ourselves from daily torment in hopes of living out the rest of our lives in leisure, splashing with Tim Tam in the pool?

Roaring and slicked with sweaty blood Buff Brick, the most fantastically muscled newborn in all of creation, was granted parturition. His massive form panted hairless upon the dying grass. We clapped him on his body and laughed at the comedy of our misadventure. After a hit of opiates each we enfeebled gleaming four left our creation where it hunkered in victory and joined Tim Tam back in the pool. A conciliatory bottle of Jack was passed between us.

There we stayed until the hallucinations overtook us. We Good Gentlemen, tripping proverbial balls, retired once more to our dens of isolation under a darkening sky, bracing mentally for what harrowing ecstasies awaited. Indeed, today was not different from so many others. We did not reach the nirvana for which we all sought. Ye gods though did we try! And will try just as hard again!