George was hungry. Actually, George = hungry would be more correct. To be perfectly clear: George was, is and will continue to be hungry long after his inevitable death.

However, George wasn’t a big man. He could hide his malady. At work as a file clerk for a local law firm, he hid his snacks. This being 1985, paperwork was at a near-maximum. The rows upon rows of cabinets containing case files and litigation records and profiles allowed for quite a bit of “squirreling-away” space.

Had he lost the occasional homemade nutbar? Sure. Had he actually forgotten a tuna salad sandwich for four weeks in a drawer marked Case Files: HUK-HUKL? Ok, yes. Yes, he had.

Indeed, it had cost George his job. And while we’re at it, yes, the aforementioned blunder was the proverbial straw that broke the camel’s back in George’s tumultuous fifteen year marriage (food always being at the heart of the discord). Did his wife get the house? Yes again, Mr./Mrs. nosey -- the lawyer at George’s side was the HUK-HUKLer himself, assigned to marital litigation b/c of George’s inability to pay for his own lawyer (food expenditures, you see).

Now (the day of our tale, Oct. 16, 1985, Waterville, ME) George had nothing left. No place to stay, no wife, no clothes other than those on his back. Most importantly: no food. He was famished.

What he did have was fourteen cents to his name. Not even enough for a bag a’ cashews.

George was exiting the Quality Court parking lot when he heard a voice say, “Hungry?”

A bearded old man with craned back and burlap (yes, burlap) slacks jigged from behind a tree. It was weird and George picked up his pace.

George had never heard a sane man talk like this and kept up the avoiding.

“What if I offered you the chance to never go hungry again? Just for the fourteen cent in ya pocket!”

George stopped. How could this old weird-o know he only had fourteen cents? The old man clapped his hands and smacked his red lips. But no. There was no talking to an old crazy like this...

“No, no thank you, sir,” said George, rapidly bobbing his head in the way one who is departing does.

“Ohhh hoo dee hee!” said the old man, rapping his knee with his knuckles. “Don’t pass up a deal like this. Just take a good long look at what you’re missing.” With an uncanny flourish, the old man pulled a sandwich from behind his back: glorious, stuffed, overflowing with meats and cheeses. Steam rose from its fresh-baked bun. 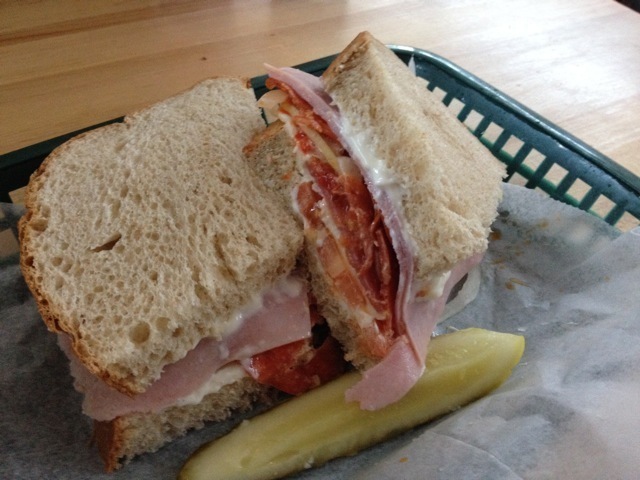 “Got the old peepers and stomach in parlay I see,” the old man laughed again, coughed, and a car horn honked somewhere. “Call her the Lucretia Borgia: best sandy you can find. One bite and you’ll never go hungry again.” More laughs followed by a coughing fit.

From the looks of the sandwich, one bite would never be enough; it was the size of an Oxford Dictionary.

“And I can have that?” said George. “That whole sandwich.”

“Oh the whole doodlebug! Yes-ee!” said the old man, eyes watering from all the coughing. “Never hungry again,” he said, doing a weak little jig, stopped short by the threat of more coughing.

George could smell the sandwich from where he stood: wafts of rich, cured pork, tangy pepperoncini, and the warm, almost cake-like scent of the bread. His stomach made the decision for him. It always had.

George handed over his coins and tried not to touch the old man’s gnarled hands. He was not successful.

The sandwich was dense. As George brought it to his lips, the old man began to laugh. Higher and higher and louder and faster. The old man’s maniacal laughter should, probably, have tipped George off that something bad was in store. But it didn’t. George bit in.

He felt something happening inside. Something he had never felt before, but knew, intimately the moment it spread within him. Sweet joy of joys, he was full! Wholly and completely full! Satiation at one bite, and yet there were so many more.  He took another bite; it completed him with a fullness he’d never experienced. It expanded with heat and warmth from his very stomach to the utter extremities of his form. George took a third bite. Then a fourth. And again and again.

George could no longer hear the old man’s hacking cackles. The taste and process of eating consumed him. He was full. Finally full. Bite after bite, the sandwich seemed never ending.

But then it began. Too full. The sides of his stomach ached. His head began to pound. A trickle of sweat ran down the back of his neck. The food felt like it was expanding. He couldn't stop himself.

And then the old man’s cackling came back. Thundering.

George’s gut flopped out all at once. His limbs sprouted and grew. His legs expanded by five times into soggy pools of flesh before shooting him upward, rolling the skin and muscle as they climbed. George's screams lowered in rapid octaves as he grew.

And in his head, names appeared. An endless wall of monikers, crowding for space. Dr. Seuss. Richard Simmons. Mad Max. Wishbone. Sea Pig. Bebe Rebozzo. Dr. Johnny Fever. And on and on and on. Each name had a flavor: savory, bold, sweet, complex, acidic, crunchy. Each one married to a flavor and girth that expanded the walls of his mind, out and out and out. 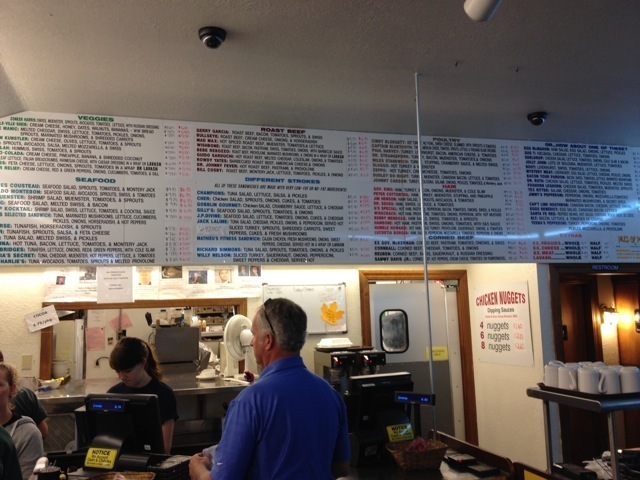 Pick a sandwich in under a minute and I will personally knit you a hat (I won’t).

When the pain and growing stopped, George was at least forty stories tall. He wore a red polo and pleated khakis the size of a stadium’s tarp. His loafers had the capacity of Olympic pools.

If he were paying attention, he would have seen the old man hop into a little wooden cart and use his feet to skeedle away. But he didn’t. Bye bye old man.

George surveyed the landscape. Cars had stopped and people were screaming. He was hungry again. George imagined a sandwich, rich in meat and ingredients, and then a name popped into his head, Miles Standwich. It sounded nice.

“Miles Standwich,” roared George. And just like that, a doublewide-sized sandwich appeared in his hand. Like, *SMAGOOF*. There it was. 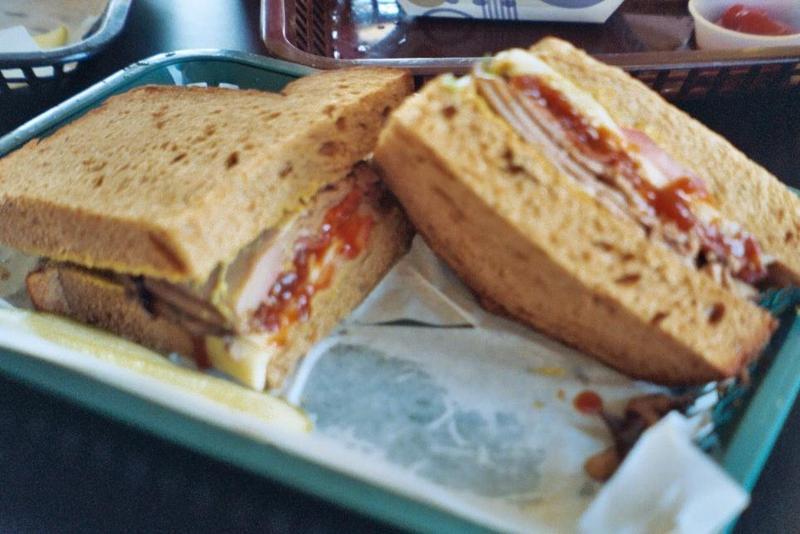 George dug in. The turkey mingled with the stuffing and the cranberry provided a sweet tang to round it all out.

Unfortunately, the tattoo of a helicopter’s blades broke his mealtime reverie; wouldn’t you know it, it was the National Guard.

George rose up to meet them, *POOFALOOF* a Cornball in one hand, *PAPOOSE* a Tina Tuna in the other. He smiled: so many peoplekins to feed!

But, said peoplekins were less than hungry. A missile sizzled from the helicopter’s side. Screaming, it caught George in the pelvis, bringing him to his knees.

“Sea Pig?” he said in a voice halfway between a foghorn and a tree trunk cracking in half. The shot blasted a chunk off him, revealing fresh cold cuts of every variety inside. He looked from his wound to the line of drab vehicles, treads squealing as they closed in. “Rowdy Yates!” he said, before chucking a cadillac-sized sandwich into the chopper’s blades.

With the disgruntled noise of a gummed engine, the chopper dove into the ground, taking out a humvee in the ensuing conflagration. The tanks stopped and in the air came the peel of old-man laughter, somewhere far away. It was only broken by the thunder and puff of more tank rounds. George ran.

His loping steps took him through the center of town, across the Kennebeck river and into the rolling hills of Winslow. The National Guard gave chase.

It was on a long, lazy road called Gifford -- when a tank round caught his knee -- that George was forced to make his last stand.

Fire rang back and forth. The military forces had to extract vehicles from under slabs of moist roast beef. Infantrymen dodged marinated mushrooms as big as wrecking balls. A pinned specialist gnawed her way to freedom through three layers of pepperoni. A brobdingnagian dollop of cream cheese landed on a mortar team; their screams were never heard.

Only after the sun cleared the horizon and long shadows felt their way across George’s prostrate form, did the firing finally stop.

He looked back to his company, a smile on his face.

A cheer rose through the ranks and they descended on George’s cold-cut smorgasbord of a body. Staff Sergeants ate until they puked and then ate more. Tanks were laden with meats and cheeses to be carted back to base. Even the First Sergeant made an appearance, sporting a bib that said “Hungy Boy.”

It was a feast that has not been rivaled before or since.,

A year later, in 1986, a memorial was placed to that grand battle. It was not a monument, or a stone, or even a grave, but a shop. A shop where silly-enormous sandwiches can still be bought for next to nothing and eaten until the eater, quite non-literally, is ready to die. 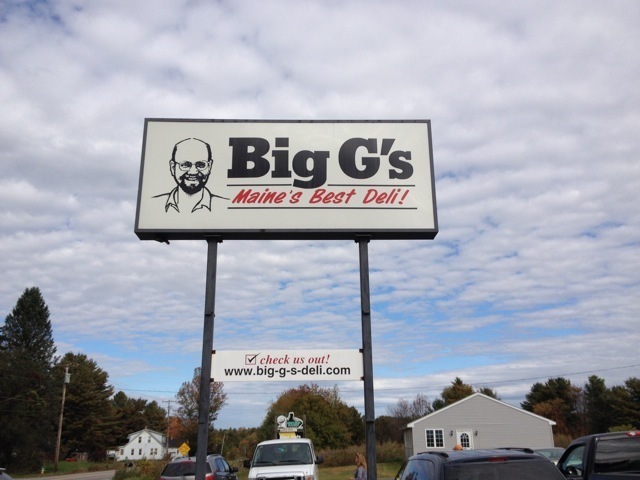 You can visit that 'diculous deli, as many people do, on a quiet road in Winslow, Maine. And if you do pull up there, some bright afternoon, don't forget to salute the sign. For that's the very face of George, the short-lived, sandwich-creating giant, smiling down upon you.