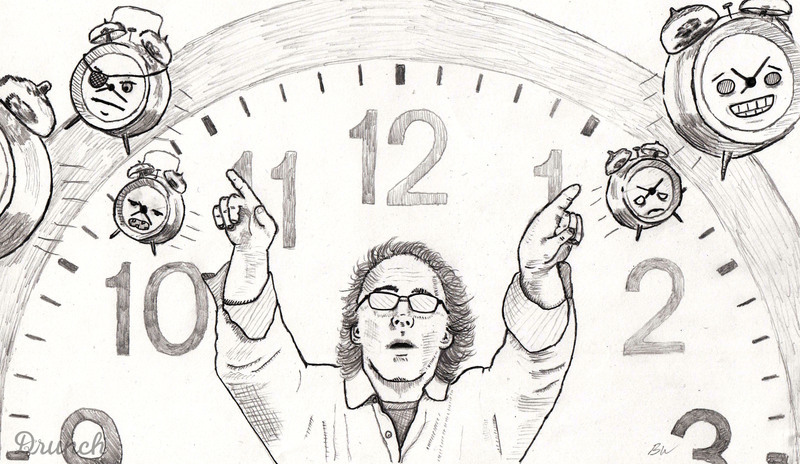 If I were a betting man, I’d wager you’ve recently thought about time.  Maybe it was when you were late for an appointment? Or possibly when you were contemplating whether or not to hit snooze again? How about when you looked up from work for the first time all morning and couldn’t believe it was already lunch?

But what is time? Welp, that’s what I'll be exploring today. A light, breezy topic.

If we’re going by Merriam Webster’s definition, time is a nonspatial continuum that is measured in terms of events which succeed one another from past through present to future.

While accurate, it’s bone dry. Whoever wrote it probably hears "New Year’s Eve" and thinks of the official end of the calendar year.

A more interesting definition of time, to me at least, would mention concepts like inevitability, progress, and maybe irreversibility. But still, none of these terms really capture the fullness of the word.  When thinking of time—that invisible force forever dragging us out of the past—it’s always more helpful for me to put it in human terms. To think about how time applies to all of us directly. That being the case, it might seem odd that my favorite encapsulation of the idea of time comes by way of physics, a decidedly impersonal discipline.

In short, physics describes time as an increase in entropy.

Before we get into entropy, I want to back up for a second. I’ve been spending a lot of brainpower thinking about time recently. In particular, I’ve been thinking about how fast the past four months have gone. To put that into context, I recently relocated back to Portland, moved in with a significant other, inherited a dog, and started a new job. All these variables have sped up the pace of my days. On top of that, I’ve been thinking of how it was only a little over a year ago when I left Portland to write a book. That year of writing is both vividly recent to me while still feeling like a snapshot from another life. (The book is written, by the way. Publishing it, however, is another journey.) I think what I want to get across here is that time is tricky. It's taxing to picture the contours of a year, let alone a lifetime. And a lifetime (plus) is where entropy really makes itself known.

Entropy, as interpreted by capital S Science is a sort of universally mandated increase in disorder—a spreading out of sorts. It’s the reason why everything eventually falls apart. As Anton Chekhov put it, “only entropy comes easy.”

Entropy is why tires wear out and pop, why jeans rip, why flat dirt roads gradually become all bumpy. It is the subtle force that undoes everything we do. And if entropy only increases with time, that means life—whether we see it or not—is just an increase in disorder. (Of course, this disorder is sneaky, because it’s true aim is ultimate order: everything broken apart and evenly distributed, perfect, unremarkable disarray.) Here’s the official definition.

That definition—time is an increase in entropy—was grandfathered by a spectacularly bearded physicist named Rudolf Clausius in 1850, when he proposed the basis for the second law of thermodynamics: the entropy of an isolated system can increase, but not decrease. This means, to us soft brains, that a dish can only break, a broken dish will never just randomly shatter back together. The falling down shed, with its sweet-smelling mildew and gap-tooth slats, will never repair itself. Left alone, it will only fall down and disintegrate into dirt.

Entropy means that, without us horning in, everything falls apart.

You could of course take the idea of time pulling all things apart into the realm of life: friends moving away after college, relationships being tested by arduous time, families drifting apart. There’s enough there to fill a whole (pessimistic) book, let alone a post, so I’ll leave that be for now.

It’s also a super-bleak way to look at life. So here’s where this definition of time starts to get interesting—and more hopeful.

Think of science as a skull and writing as a little silly clown hat on top of that skull.

If time is a march toward everything breaking apart, what happens when we tidy up? When we fix that loose door handle? Super glue the arm back on your son’s Ninja Turtle? Call up an old friend? All these are increases in order. You, with physical effort, are putting energy back into the system to reverse entropy. And when you reverse entropy, you reverse time.

Reversing time? you scoff. While you’re not exactly bringing that jiggly doorknob back to a state of newness by screwing it back in, you effectively are. You, in your daily chores—the washed dishes, the polite conversations at the office, the vacuumed carpet—are reversing the effects of time on everything you touch. The spill that you mopped up could have rotted out a hole in the floor without your efforts. The car you washed could have rusted out and been sent to the scrap yard. The relationship you rekindled could have easily seen both parties become effective strangers. All this entropy reversed by you. Every day, you’re manipulating time.

So what the hell does writing an esoteric food blog have to do with disorder? With entropy? With the reversal of time? Well, it might be a stretch (and if it is, it’s a stretch that I invest a decidedly silly amount of passion in) but this blog—this sort of writing—is my attempt to wrangle some of that entropy. My effort to tidy things up (and thus give back some time) to the reader.

At it’s most basic, writing is the act of taking a bunch of disparate parts—ideas, letters, words—and ramming them back together. It is the discipline of rediscovering interesting ideas, stories, characters, and situations then polishing them up (since there are no new ideas, but again, a massive topic for a different time). Writing is the craft of keeping words like crapulous (having eaten/drank too much), scrofula (a disease that comes with glandular swelling, also called “King’s Evil”), and lucubration (an over-wrought piece of writing like this one), from disintegrating into metaphorical dust.

That, and writing un-publishable short stories in an unreadable blog. That’s also what writing is, to me.

Crapulous is actually another word for "drunk." True story.

On their own, ideas simply float around unattached, slowly fading to nothingness. Only when a fancy collection of neurons and dendrites, like the ones we have in our brain, net them out of the ether do they exist. Without brains, there would be no ideas. This seems a bit silly to say, but it’s worth noting. Ideas aren’t immune to death. They’re fragile and require care, just like that falling-down shed, or that broken action figure.

So when a person takes a single idea (or scoops up a couple and mashes them all together, as is the case in most great work) they breathe new life into the idea involved, revive it. That’s a big part of why I read, to find these ideas, and why I write, to refurbish them. All the effort I put into writing is an attempt to help polish things up a bit in the reader’s eyes, and to possibly make them feel like they’ve gained something from it. To transfer the time I’ve taken in tying everything into a little package specifically for the reader. It’s what every writer does, in fact, whether they know it or not.

Also, I will sometimes write huge, brainless piles of jokey trash. Heck, most often that’s the case. But even those, I hope, bring some enjoyment. And time spent in enjoyment—if it’s enriching like time with friends, and not destructive like eating two bags of Oreos while high on mescaline—is still time well spent.

More philosophically, writing is combating the inescapable loosening of all the parts of life.

Put another, more philosophical, way, writing is combating the inescapable loosening of all the parts of life. By wrapping thoughts and experiences into short stories, they are preserved. Bound together again. The details are repaired and the scene is made new. The ideas get tidied, if only for a brief while.

Of course if nobody reads them, it doesn’t really matter. But let’s not dwell on that reality for too long.

Chances are, whatever you do could actually be broken down into the combating of entropy as well. Maybe you sell insurance. That’s just another way of protecting people against the inevitably branching future. Or you could be in the medical field: curing illness and healing injuries that often come from the inevitable breaking down of our bodies. You literally give people more time. Heck, even if you build desks, you’re creating a spot for someone to do some tidying of their own (plus, you’ve saved them some time in constructing it for them). With some mental gymnastics, pretty much everything we do can be broken down into the human struggle to keep it all together in a reality whose sole interest is in falling apart.

It feels advisable to wrap this up in a way that doesn’t make you want to dive headfirst into a bog. So try this on for size.

Even if entropy is acting to subtly break us down, doesn’t that just give our life at least one concrete purpose? Like, perhaps there’s more value than we think in just tidying up—in keeping things from getting away from us. The fact that time itself is pulling us apart also means it’s an accomplishment just to keep it together. So, if you’re generally healthy, have a few friends, and are able to hold down some kind of means of income, that’s pretty awesome—especially considering the implacable, uncaring forces you’re up against.

Thanks for your time, of course. I wish you the best of luck in keeping things from falling apart, since the things themselves have no desire to help you out.