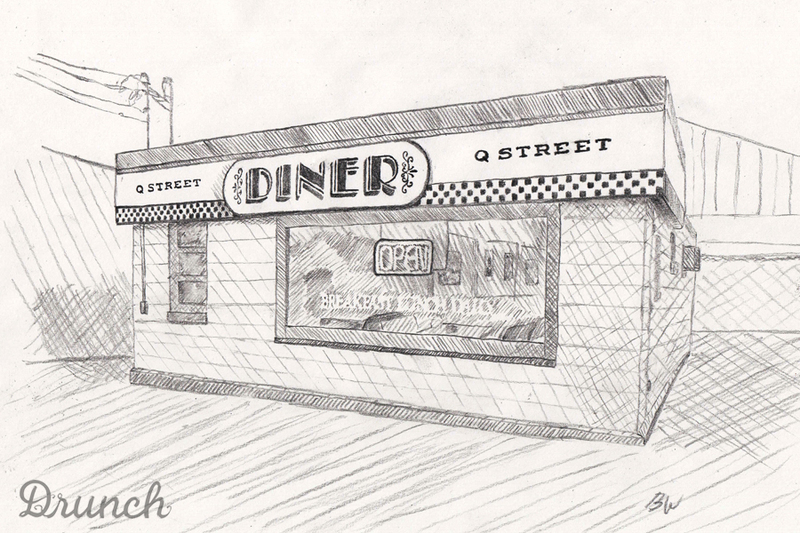 Laird Gilkes IV had stipulated in his will that his wake would take place inside Q Street Diner. Now, the tables were pushed against the wall by the entrance and the chairs were all arranged in rows facing the window, in front of which Laird’s waxen body sat.

Laird didn’t want a traditional ceremony in which he was laid out like “a snoozin’ slouch,” as he put it. Laird wanted to be seen in action. So his embalmed form was sitting at a table; his rigid arm raised a black cup filled with steaming coffee and his head was thrown back as if caught at the peak of a raucous joke. I imagine it had cost an extra penny for the morticians to figure out how to rig him up  — fishing wire shot from Laird’s limbs making him appear, if you caught the right light, to be a shrieking man snared in a massive spider’s web.

I was the first one there, being Laird’s best friend. Laird’s wife had long since passed thanks to a weak heart — she was a large lady — and they’d had no kids beside. The Lesters — a father, son mortician operation — whispered with the wait staff by the door; I think the younger Lester had his eye on the waitress with spectacular hips.

Sherman and Layla Kinnerman were the first to arrive; this surprised me. Sherm had, understandably, harbored a grudge against Laird. Twenty years ago, or so, Laird took Sherm’s family on a Caribbean vacation while Sherm was in Toronto on business. It had never come out whether or not Layla Kinnerman, a minx even at 70-something, had sealed the deal with Laird over those sunbathed seven days, but rumors still abound in several directions. Thus, my surprise at Sherm’s promptness. Maybe it was just that Sherm couldn’t wait to see Laird dead and wanted to make sure he had front row seats. He nodded to me as he passed, his head frilled in a fur hood, pulled up against the dead chill of winter.

The wait staff began to circulate with plates of silver dollar pancakes, one of Laird’s favorites.

Next through the door was Barry Trembleau. His bald, buzzard’s head nearly scraped the ceiling and his oxygen tank wheeled with him like a little an obedient fire hydrant. Barry and Laird had fought side by side in Vietnam. When the nights got late and the Goldschlager — another favorite of Laird’s — got low, they’d always come to the story of the Asian goose they’d used to flush out a Vietcong bunker. The way Barry would tell it, it was the height of tactical stratagems. The way Laird saw it, they were two men higher than an Aroostook spruce, futzing with wildlife.

The story went: Barry and Laird were stuck in an encampment on the Vietnamese coast and thus were powerfully bored. After ripping down an overstuffed blunt filled with the army’s best wacky tabaccy, Barry, skilled with ropes, decided to snug a poacher’s knot around the leg of a goose that just wouldn’t stop honking around their position. Laird, an inveterate jokester looped a grenade to the other end of the goose’s rope and pulled the pin. Their mirth at this outrageous prank turned instantly to chagrin when the goose flew into their bunker. Hollering, they fled, pursued by the hissing, explosive goose. After running for several agonizing seconds, Barry and Laird looked back to see the goose still in hot, flapping pursuit. So when the explosion came, it surprised the heck out of them that it was from far behind. As luck would have it, Laird was a terrible knotsman and so the grenade had gotten caught in a bush that happened to also be the entrance to a critical Veitcong bunker. Hearing a close explosion the Vietcong had taken themselves as besieged and come one by one, hands up, surrendering to the two giggling G.I.s. Both men had earned some stripes on their uniform for that.

Now, seated in a thick ribbon of sunlight, Barry shot me a lazy salute.

Next in were the Juarez twins, both their young families trailing in tow. Laird had become a sort of demigod to the Juarez twins — now in their respective primes at thirty-six. They had emigrated up to Maine from Juarez, thus their unimaginative moniker given by Laird. Their real names were Ronaldinho and Pitá Izquierdo — far more difficult to pronounce than simply saying the Twins Juarez.

Laird had given them their first job at his repair shop before they spoke a lick of English. Laird himself had made sure they stayed in school long enough to get their bachelors and then as a gift for completion he’d introduced them to the Harrison twins, two long-legged beauties who now carried their respective offspring into the Q Street diner.

Heralded by a keening shriek, Shep Blatter burst through the door.

“It’s not true,” he shouted. “Gilkes was healthy as a bull moose not one week ago!”

This was an outright falsity. Laird had been laid up in hospice for three months with the spreading cancer that would bring his quietus. Shep, on the other hand, was a drunkard whom Laird occasionally accompanied out for rips. I could smell Shep’s breath from where I sat, the space afore his white-whiskered maw quavered like air over Arizona pavement.

“See!” said Shep, squinting one bleary eye at where Laird was strung. “There he is, enjoying a steaming cup!” Shep teetered to where Laird sat — Shep’s walk stemmed exclusively from his lower torso, his thighs wide and knees stuck at the thirty-degree angle. “You old hound you had me going,” Shep said, reaching out and patting Laird’s hand. Upon feeling Laird’s cold, mannequin skin, realization burrowed its way through Shep’s bulwark of rye. He fell to pieces right at Laird’s feet. After a tasteful pause, the Lesters hauled Shep to a seat near me in the back where he whimpered and slugged conciliatory snorts from his flask.

It being about time, people began to filter in more rapidly. There was Chilly Wentzle, an old fishing buddy of Laird’s with whom Laird had won the East Coast Angler’s Award with leviathanic stripers straight from ’77 to ’82; the “Gilkes Chill” those years had been dubbed. There was Candy Humboldt, Laird’s modern jazz dance partner. There was the entire Clan Lugerbank, a laconic pride of feral North Ponders whom Laird had schooled in Greco-Roman wrestling.  They were followed by, among others, Cougar Manx, a local Flamenco guitar wizard, Vidalia Gooch, a transgender gypsy who had exorcised Laird’s 1986 Ford Bronco, and Biff Termagant, the self-titled Boldest Man Walking.

I recognized nearly every attendant. Most were townies and others were old friends of Laird. Laird and I had been best friends since junior high, so I knew pretty much everyone he did. Closeness notwithstanding, there was one man who shuffled in that I could not place. He wore a dark green cowboy hat pulled way down over his forehead and had a beard that sprung out from over the top of a tightly wound scarf. His limping gait was almost comical. I swiveled in my chair to get a better look but the mysterious fellow scurried and sat at an oblique angle to me, way back in the corner.

At the head of the room, Ignatius Burton Creed, a one-armed lobster man and licensed Justice of the Peace from Acadia, stood and cleared his throat. Ignatius had sung baritone in Laird’s barbershop quartet. Despite Ignatius’ labored throat clearing, nobody was really quieting down. He began despite the noise

“Here we gather for a great man,” he said. He-uh we gatha, it came out in the inimitable Maine dialect granted only by a lifetime of exposure to pines, moose, and snow. His words soothed the dining room to silence.

I became contemplative, as one does at an affair like this. Laird’s death still hadn’t found its way into my heart. I just sat there and thought about the man I knew, rather than the man I was going to miss. And who was that odd man in the back anyway? Who was I for that matter? Would I have an attendance like this, were I to suddenly pass?

Ignatius spoke on, galvanizing the disparate characters in attendance. I faded in and out of attention. After a pause from Ignatius, Cougar and Candy stood up to perform a flamenco piece with Cougar on the strings and Candy interpreting the somber notes through dance.

My lack of focus made sure that I wasn’t even the first to notice the mysterious man stand. I reacted to Layla Kinnerman’s gasp.

“Lies!” croaked the shrouded man from the back of the room. “Lies!” he repeated, kicking the chair in front of him. With everyone’s attention firmly in place, the shrouded man yanked from his jacket a small, oil-black pistol. Gasps and shrieks rippled through the gathering. With a cry of rage this unknown man rushed the head of the room where the still-dancing Candy Humboldt waggled her arms in a trance.

Cougar, considerably more present than Candy, dropped his guitar and tackled her off to the side. The shrouded figure rose to full height and shot three rounds at the already-deceased form of Laird Gilkes IV. Shrieks rang out even though Laird was already dead as hell. I dove down below my seat like the rest.

“Nobody move,” said the mysterious man, laughing now. It was an odd laugh in that I’d heard it before. Heard it a million times… By God if it wasn’t the laugh of Laird Gilkes IV!

I peered over the top of the seat. At first I thought, Not possible. You’re seeing things! But there, taking off his hat and fake beard, laughing like a damn hyena at a hippo feed is Laird Gilkes IV in the flesh. “Because we’re about to have a party!”

“A haint!” screamed Inger Lugerbank, clutching for her husband. “A wicket spirit, my Lord my lord!”

“Fear not, Inger,” said Laird Gilkes IV, pistol whipping the head off of what everyone had previously taken to the Laird Gilkes IV. “I had him made out of wax. Pretty neat work huh!”

“Ha!” said Shep Blatter, who leapt up, wobbled and fell back into his chair. “I knew he wasn’t dead!”

Sure enough, Laird had gotten us all. At the party that his faux-wake became, Laird let us all in on the intricacies of the ruse. He’d been faking the hospice with the help of hired actors and had lost all the weight voluntarily thanks to what he called “the role of a lifetime.” Everything had gone perfectly. Now, he yelled, clapping me and everyone else within reach on the back, he had all his friends in one place — an accomplishment that he rightfully predicted wouldn’t have happened without his actual death. He’d pulled one last fantastic prank on everyone in attendance. It was beautiful, he’d said. Boy oh boy did we whoop it up that night. Boy oh boy.