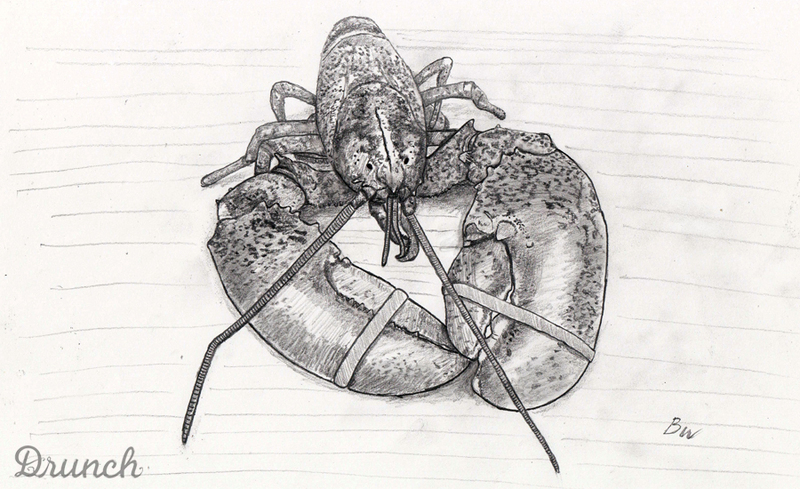 The Ballad of Captain Grey

From upon the quay one could say they see no ship at all,

The angry ocean boils and foams, a raving heaving squall,

But in that gnashing maelstrom there is one surviving boat,

And at its helm my hero Captain Grey keeps us afloat,

What little of his coarse black hair not plastered to his head,

Stands in a rigid cock’s comb: an affront to doom and dread,

His trunk-like chest it ripples as he wrestles with the wheel,

I gaze to Grey from where I cling gasping at the railing,

Of all the men I’ve ever met, Grey he has no failing,

And in our crew there remain but two, not counting me and Grey

Simple Shippy and Quiet Phil cleave with us through this fray

Now Shippy is an oafish lad, not one for deeper thought,

Through hell and worse by our side Shippy, like a hound, has trot,

And Quiet Phil is, simply put, emotive as a stump,

A man could swear that he was dead if not for his heart’s thump.

So long ago it now appears we flew from Casco Bay,

For fame and fish our crew of twenty lustily set sail,

With Captain Grey firm at the wheel I knew we couldn’t fail,

As his first mate it was my job to keep the crew in check,

So day and night I sang the Captain’s praises from the deck,

“Stately Grey’s an enigmatic one,” crowed my praising voice,

“But were I to pick from a million men, Grey’d be my choice!”

As I foretold the Captain quick upheld his reputation,

With daring deeds of seamanship that need no lame inflation,

Grey he possessed the perfect plan for all situations,

First Grey posed ever valiantly his eyes cast to the lord,

As in rough seas our un-lashed gear was bucked straight overboard,

Next, he daringly hunkered down inside his locked bunk,

As pirates swung onto the ship and looted every trunk,

Then came the morn he courageously ran our ship aground,

Only a man as bold as he would sail where reefs abound,

And though we fished and trawled and strove our hardest to the mate,

The captain he had bravely bought us useless rotten bait,

Our first port of call saw nearly all mates swim for the land,

Sure we came in eight months late, but such weakness I can’t stand,

I know the hardship of our trip sounds irrefutable,

But Grey’s great plan was so profound it is inscrutable,

We fabled four embarked once more: Shippy, Cap, Phil and me,

Our billowed sails left those yellow doubting culls in the lee,

And despite two more long years at sea we have naught to show,

But given the chance to choose again, with Captain Grey I’d go.

Black rain falls both up and down and the seas merge with the skies,

We totter in a mast-less tub, on a wet precipice,

But if there’s a man it’s Grey that can get us out of this,

Smashing down it gnashes the ship like a great salty buzzsaw,

Both Shippy dear and Quiet Phil vanish into the brine,

Their loss no doubt necessity to Grey’s cunning design,

As Grey preordained, I now cling with him to a split plank,

I tried to yell a compliment but only sea I drank,

Then in the haze I catch Grey’s gaze and see it straight and true,

Dauntless Grey, my guiding light, knows exactly what to do,

He looses a knife from his boot and raises it on high,

The plank we grip can’t hold two manly men like he and I,

It is his ship, I fast concede, though ‘tis only a slat,

As his blade sinks down ‘tween my ribs that, my good friend, is that,

Your perfect plan is still in motion, though I disembark,

Yes in the end you’ve robbed me of my very life and love,

Yet you I still venerate as I sink to what’s above.